In my last multirotor themed entry I gave an insight into the magical world of flying cameras. I also gave a bit of a promise to write about the open source flight controllers that are out there. Here’s a few that I had the luck laying my hands on. We’ll start with some acro FCs, with a very differt purpose to the proprietary NAZA I started on. These are meant for fast and acrobatic flying, not for flying your expensive cameras on a stabilized gimbal. Keep in mind, I’m still fairly inexperienced so I don’t want to go into specifics and provide my settings just yet.

The best thing to be said about CC3D is that while being aimed at acro pilots, it’s relatively newbie friendly. The software is fairly straight forward. Getting the QT app built, set up the radio, tune motors and tweak gains is not going to make your eyes roll in the same way APM’s ground station would (more on that in a future post, maybe). The defaults are reasonable and help you achieve a maiden flight rather than a maiden crash. Updating to the latest firmware over the air is seamless.

Large number of receivers and connection methods is supported. Not only the classic PWM, or the more reasonable “one cable” CPPM method, but even Futaba proprietary SBUS can be used with CC3D. I’ve flown it with Futaba 8J, 14SG and even the Phantom radio (I actually quite like the compact receiver and the sticks on the TX feel good. Maybe it’s just that it’s something I’ve started on). As you’re gonna be flying proximity mostly, the range is not an issue, unless you’re dealing with external interference where a more robust frequency hopping radio would be safer. Without a GPS “break” or even a barometer, losing signal for even a second is fatal. It’s extremely nasty to get a perfect 5.8 video of your unresponsive quad plumetting to the ground :)

Overall a great board and software, and with so much competition, the board price has come down considerably recently. You can get non-genuine boards for around EUR20-25 on ebay. You can learn more about CC3D on openpilot website

Sounding very similar to the popular DJI flight controller, this open board is built around the 32-bit STM32 processor. Theoretically it could be used to fly a bit larger kites with features like GPS hold. You’re not limited to the popular quad or hexa setups with it either, you can go really custom with defining your own motor mix. But you’d be stepping in the realm of only a few and I don’t think I’d trust my camera equipment to a platform that hasn’t been so extensively tested.

Initially I didn’t manage to get the cheap acro variant ideal for the minis, so I got the ‘bells & whistles’ edition, only missing the GPS module. The mag compass and air pressure barometer is already on the board, even though I found no use for altitude hold (BARO). You’ll still going to worry about momentum and wind so reaching for those goggles mid flight is still not going to be any less difficult than just having it stabilized. 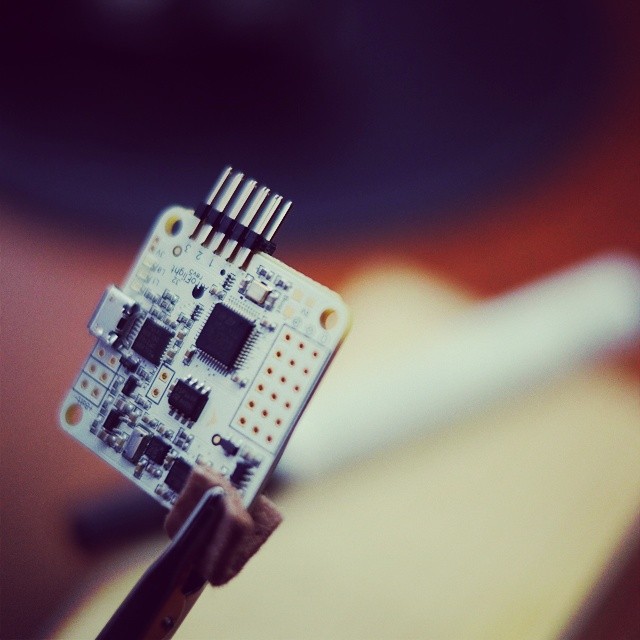 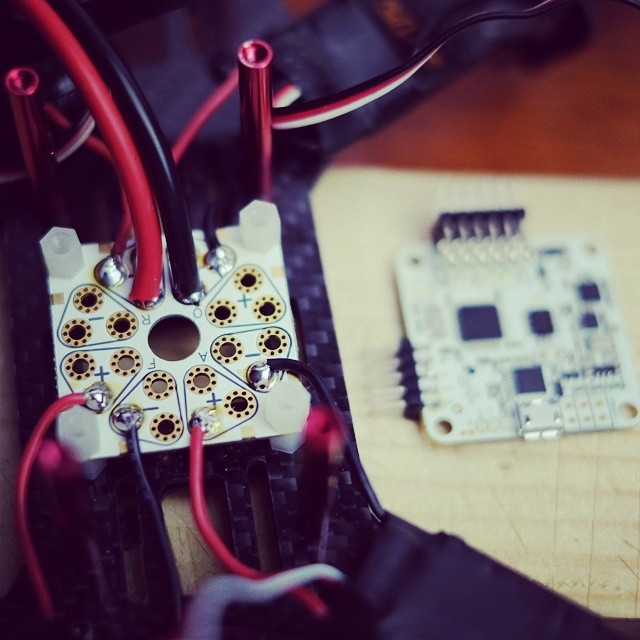 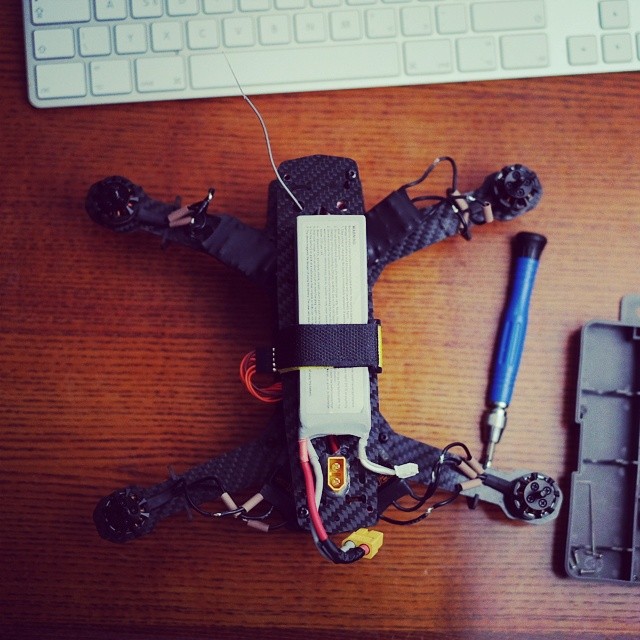 If you don’t count some youtube videos, there’s not a lot of handholding for the naze32. People assume you have prior experience with similar FCs. There are multiple choices of configuration tools, but I went for the most straight forward one — a Google Chrome/Chromium Baseflight app. No compiling necessary. It’s quite bare bones, which I liked a lot. Reasonably styled few aligned boxes and CLI is way easier to navigate than the non-searchable table with bubblegum styling than what APM provides for example.

One advanced technique that caught my eye, as the typical process is super flimsy and tedious, is ESC calibration. To set the full range of speeds based on your radio, you usually need to make sure to provide power to the RX, and setting the top and bottom throttle leves to each esc. With this FC, you can actually set the throttle levels from the CLI, calibrating all ESCs at the same time. Very clever and super useful.

Another great feature is that you can have up to three setting profiles, depending on the load, wind conditions and the style you’re going for. Typically when flying proximity, between trees and under park benches, you want very responsive controls at the expense of fluid movement. On the other hand if you plan on going up and fast and pretend to be a plane (or a bird), you really need to have that fluid non-jittery movement. It’s not a setting you change mid-flight, using up a channel, but rather something you choose before arming.

To do it, you hold throttle down and yaw to the left and with the elevator/aileron stick you choose the mode. Left is for preset1, up is for preset 2 and right is for preset 3. Going down with the pitch will recalibrate the IMU. It’s good to solder on a buzzer that will help you find a lost craft when you trigger it with a spare channel (it can beep on low voltage too). The same buzzer will beep for selecting profiles as well.

As for actual flying characteristics, the raw rate mode, which is a little tricky to master (and I still have trouble flying 3rd person with it), is very solid. It feels like a lot larger craft, very stable. There’s also quite a feat in the form of HORI mode, where you get a stabilized flight (kite levels itself when you don’t provide controls), but no limit on the angle, so you’re still free to do flips. I can’t say I’ve masted PID tuning to really get the kind of control over the aircraft I would want. Regardless of tweaking the control characteristics, you won’t get a nice fluid video flying HORI or ANGLE mode, as the self leveling will always do a little jitter to compensate for wind or inaccurate gyro readings which seems to not be there when flying rate. Stabilizing the footage in post gets rid of it mostly, but not perfectly:

You can get the plain acro version for about EUR30 which is an incredible value for a solid FC like this. I have a lot of practice ahead to truly get to that fluid fast plane-like flight that drew me into these miniquads. Check some of these masters below:

APM and Sparky next time. Or perhaps you’d be more interested in the video link instead first? Let me know in the comments.